On Thursday evening, LACROS was struck by a power failure that affected the whole university. After almost 3 hours electricity was available again and we were able to put most instruments operational again right after the incidence. The cloud radar MIRA required some more attention by the on-site personal and the remote support from Leipzig. On Friday, we could narrow down the problems to an ethernet connector. Let us hope that the backup connection will work until we can fix the problem.

The cause for this interruption were very strong winds during the whole day. A low-pressure system over Drake street triggered west-north-westerly flow at Punta Arenas. Supported by the terrain, this situation seems to favor strong surface winds at the city. Below you can see the observations of our scanning Doppler lidar, which (among other things) can measure profiles of horizontal wind velocity and direction. As the signal requires the presence of particles, that scatter the light back to the instrument. Hence, continuous information is usually constrained to the boundary layer – the layer of the atmosphere, which is directly coupled to the ground and contains comparably high amounts of aerosols.  Shown is a time-height series of the full day. Above 700 m the strong winds persisted the whole day, but affected ground only at around 10 UTC (7 local) and after 17 UTC (14 local). 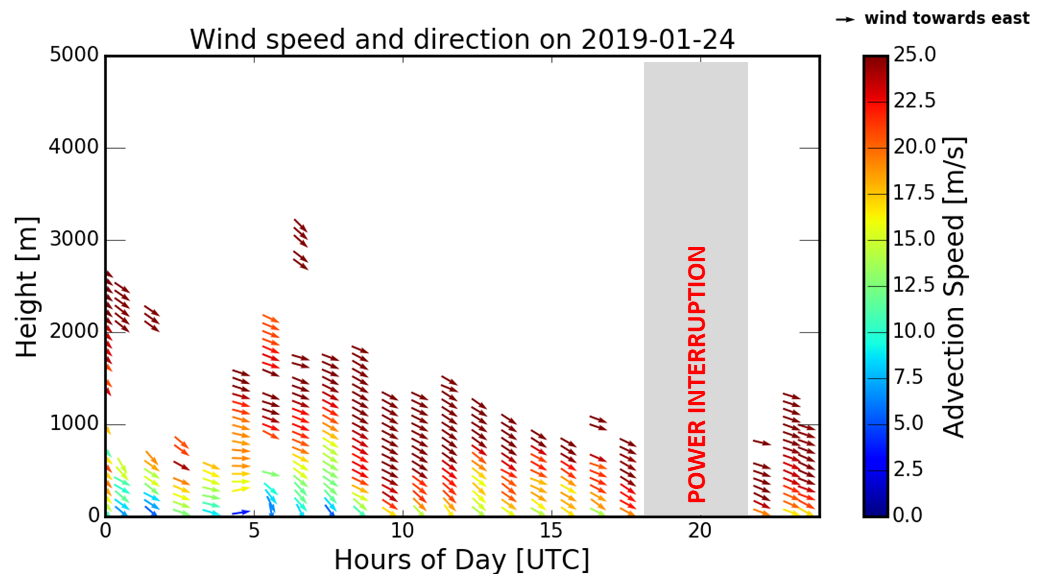 The strongest gusts at the ground reached 107km/h in the city and 117km/h at the harbor. The local newspaper also reported on this issue: https://laprensaaustral.cl/titular1/temporal-de-viento-dejo-multiples-estragos-en-punta-arenas/